Add to wishlistAdded to wishlistRemoved from wishlist 0
Add to compare
9/10 (Expert Score)
Product is rated as #1 in category Electronics
PROS:
CONS:

The Canon EOS R6 is a powerful all-round camera than can be used for almost all sorts of shooting. Next to the R5 it can hold itself pretty well, and it’s a viable option considering the R5’s price and high-end specs which is too much for most people. It might not have the enormous 8k video shooting capability of the R5 but it’s 20 FPS burst and crisp 4k at 60P video is indeed solid selling point. Questioning the resolution (20.1 MP) is valid specially when compared to ASP-C entry level cameras that offer a even a larger resolution, but the concrete qualities and versatility should make this a top 4k DSLR for filmmaking.
Key features include blazing fast 20 FPS when shooting electronically or 12 FPS using the mechanical shutter, it makes use of Canon’s deep learning AF, which can can track faces and eyes on humans, there is even an Animal AF that track animals and even birds, recognizing their eyes, faces and bodies.
On the video side it records 8 or 10 bit 4K at up to 60p, plus 1080p with up to 120p with full AF tracking functions active across all shooting formats. The R5 lack of 1080 support puts the R6 at advantage here for 1080p fans, given the fact it’s the most used resolution right now.
The R6 gets ahead of the R5 with better low ISO performance thanks to the lower resolution thus larger pixels on the full frame sensor. It also sports Canon’s latest image stabilization system the 5 axis in body, which offers CIPA-rated max of 8 stops of stability on select lens. 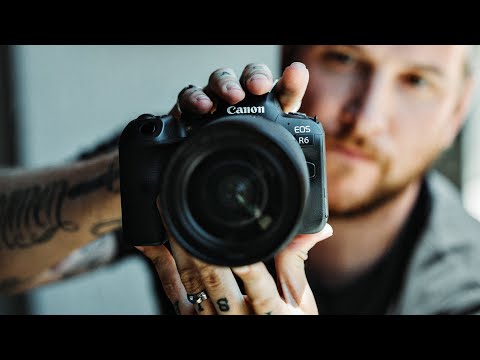 There are no reviews yet.

Be the first to review “Canon EOS R6” Cancel reply

Price and guide saves your time and energy doing research before shopping. It offers clear and trustworthy shopping guides and best prices from trusted vendors.

Get the latest guides and select products for free !